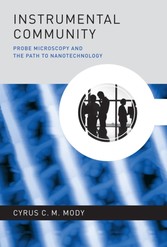 Instrumental Community - Probe Microscopy and the Path to Nanotechnology

Instrumental Community - Probe Microscopy and the Path to Nanotechnology

The scanning tunneling microscope (STM) has been hailed as the 'key enabling discovery for nanotechnology,' the catalyst for a scientific field that attracts nearly $20 billion in funding each year. In Instrumental Community, Cyrus Mody argues that this technology-centric view does not explain how these microscopes helped to launch nanotechnology--and fails to acknowledge the agency of the microscopists in making the STM and its variants critically important tools. Mody tells the story of the invention, spread, and commercialization of scanning probe microscopy in terms of the networked structures of collaboration and competition that came into being within a diverse, colorful, and sometimes fractious community of researchers. By forming a community, he argues, these researchers were able to innovate rapidly, share the microscopes with a wide range of users, and generate prestige (including the 1986 Nobel Prize in Physics) and profit (as the technology found applications in industry). Mody shows that both the technology of probe microscopy and the community model offered by the probe microscopists contributed to the development of political and scientific support for nanotechnology and the global funding initiatives that followed. In the course of his account, Mody charts the shifts in U.S. science policy over the last forty years--from the decline in federal basic research funding in the 1970s through the rise in academic patenting in the 1980s to the emergence of nanotechnology discourse in the 1990s--that have resulted in today's increasing emphasis on the commercialization of academic research.