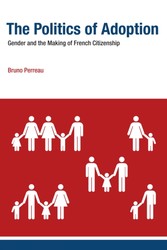 Politics of Adoption - Gender and the Making of French Citizenship

Politics of Adoption - Gender and the Making of French Citizenship

In May 2013, after months of controversy, France legalized same-sex marriage and adoption by homosexual couples. Obstacles to adoption and parenting equality remain, however -- many of them in the form of cultural and political norms reflected and expressed in French adoption policies. In The Politics of Adoption, Bruno Perreau describes the evolution of these policies. In the past thirty years, Perreau explains, political and intellectual life in France have been dominated by debates over how to preserve 'Frenchness,' and these debates have driven policy making. Adoption policies, he argues, link adoption to citizenship, reflecting and enforcing the postcolonial state's notions of parenthood, gender, and Frenchness. After reviewing the complex history of adoption, Perreau examines French political debates over adoption, noting, among other things, that intercountry adoptions stirred far less controversy than the difference between the sexes in an adopting couple. He also discusses judicial action on adoption, child welfare agencies as gatekeepers to parenthood (as defined by experts), the approval process from the viewpoints of social workers and applicants, and adoption's link to citizenship, and its use as a metaphor for belonging. Adopting a Foucaultian perspective, Perreau calls the biopolitics of adoption 'pastoral': it manages the individual for the good of the collective 'flock', it considers itself outside politics, and it considers not so much the real behavior of individuals as an allegorical representation of them. His argument sheds new light on American debates on bioethics, identity, and citizenship.