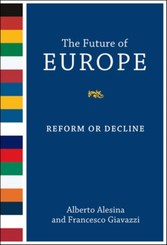 Future of Europe - Reform or Decline

Future of Europe - Reform or Decline

Unless Europe takes action soon, its further economic and political decline is almost inevitable, economists Alberto Alesina and Francesco Giavazzi write in this provocative book. Without comprehensive reform, continental Western Europe's overprotected, overregulated economies will continue to slow -- and its political influence will become negligible. This doesn't mean that Italy, Germany, France, and other now-prosperous countries will become poor, their standard of living will remain comfortable. But they will become largely irrelevant on the world scene. In The Future of Europe, Alesina and Giavazzi (themselves Europeans) outline the steps that Europe must take to prevent its economic and political eclipse.Europe, the authors say, has much to learn from the market liberalism of America. Europeans work less and vacation more than Americans, they value job stability and security above all. Americans, Alesina and Giavazzi argue, work harder and longer and are more willing to endure the ups and downs of a market economy. Europeans prize their welfare states, Americans abhor government spending. America is a melting pot, European countries -- witness the November 2005 unrest in France -- have trouble absorbing their immigrant populations. If Europe is to arrest its decline, Alesina and Giavazzi warn, it needs to adopt something closer to the American free-market model for dealing with these issues.Alesina and Giavazzi's prescriptions for how Europe should handle worker productivity, labor market regulation, globalization, support for higher education and technology research, fiscal policy, and its multiethnic societies are sure to stir controversy, as will their eye-opening view of the European Union and the euro. But their wake-up call will ring loud and clear for anyone concerned about the future of Europe and the global economy.