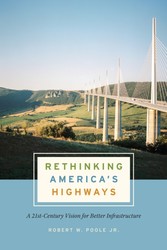 Americans spend hours every day sitting in traffic. And the roads they idle on are often rough and potholed, their exits, tunnels, guardrails, and bridges in terrible disrepair. According to transportation expert Robert Poole, this congestion and deterioration are outcomes of the way America provides its highways. Our twentieth-century model overly politicizes highway investment decisions, short-changing maintenance and often investing in projects whose costs exceed their benefits.In Rethinking America's Highways, Poole examines how our current model of state-owned highways came about and why it is failing to satisfy its customers. He argues for a new model that treats highways themselves as public utilities-like electricity, telephones, and water supply. If highways were provided commercially, Poole argues, people would pay for highways based on how much they used, and the companies would issue revenue bonds to invest in facilities people were willing to pay for. Arguing for highway investments to be motivated by economic rather than political factors, this book makes a carefully-reasoned and well-documented case for a new approach to highways that is sure to inform future decisions and policies for U.S. infrastructure.