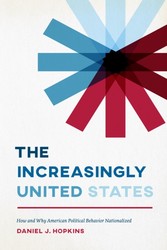 Increasingly United States - How and Why American Political Behavior Nationalized

Increasingly United States - How and Why American Political Behavior Nationalized

In a campaign for state or local office these days, you're as likely today to hear accusations that an opponent advanced Obamacare or supported Donald Trump as you are to hear about issues affecting the state or local community. This is because American political behavior has become substantially more nationalized. American voters are far more engaged with and knowledgeable about what's happening in Washington, DC, than in similar messages whether they are in the South, the Northeast, or the Midwest. Gone are the days when all politics was local.With The Increasingly United States, Daniel J. Hopkins explores this trend and its implications for the American political system. The change is significant in part because it works against a key rationale of America's federalist system, which was built on the assumption that citizens would be more strongly attached to their states and localities. It also has profound implications for how voters are represented. If voters are well informed about state politics, for example, the governor has an incentive to deliver what voters-or at least a pivotal segment of them-want. But if voters are likely to back the same party in gubernatorial as in presidential elections irrespective of the governor's actions in office, governors may instead come to see their ambitions as tethered more closely to their status in the national party.?