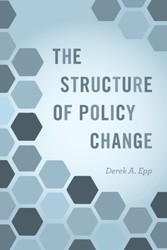 When the Soviet Union launched Sputnik, the Red Scare seized the American public. While President Eisenhower cautioned restraint, his hand was forced, and NASA's budget had increased five thousand percent over its pre-Sputnik levels by the time President Kennedy proposed landing a man on the moon. Spending on the space race is in no way unique, Almost every policy area has its own Sputnik-type story, where waves of popular support for an idea (or disillusionment with a previous one) created new political priorities, resulting in dramatic changes to the budget or compelling agencies to respond quickly with little knowledge or preparation. Is this instability an inherent feature of the policy process, or is it possible for an agency to deal with problems in a way that insulates it from swings in public opinion and thus imposes some stability on the decision making process????????????Derek A. Epp argues that some agencies can indeed do that and that instability is at least partially a function of poor institutional design. While it is inherently more challenging to maintain stability around complex problems like immigration or climate change, the deliberative process itself can affect the degree of stability around an issue. Epp looks at whether agencies follow a deliberative model for decision making, in which policies are developed by means of debate among a small group of policymakers, or a collective model, in which the opinions of many people are aggregated, as with the stock market. He argues that, in many instances, the collective model produces more informed and stable policy outcomes that can be adapted more readily to new information and changing public priorities.?