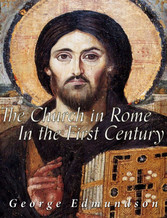 The Church in Rome in the First Century

The Church in Rome in the First Century

The narrative of St. Luke in that earlier part of the Acts of the Apostles which leads up and is introductory to the main theme of the work is obviously fragmentary. The object of the writer however stands out clearly. He intended to give such an account, step by step, of the beginnings of Christianity, as was necessary for a full understanding of the life-work and missionary labours of St. Paul up to the time of his captivity at Rome. Every episode appears to have been carefully selected with a definite and precise purpose, and if the story, as told by him, seems at times to be tantalisingly brief and scanty, even disjointed, we must remember that those for whom it was written had access to oral sources of information from persons who had witnessed or taken part in the events described, which would place each episode in its proper setting and give to it its rightful significance. This we cannot do now, but if we bear in mind that not only the facts recorded by Luke but even his silences are suggestive, we may, I think, by the help of evidence gathered in from various sources, from contemporary or nearly contemporary writings, from the accumulated results of archaeological research, and from well-authenticated tradition, be able to show that the spread of Christianity during the period covered by the Acts was not by any means confined to the sphere of Paulâs activity, nor intended to be so confined, but that one most important field was reserved for the Apostle who fills the foreground of the Lucan narrative up to the year 42 A.D. and then, except for a single brief appearance, is seen no more.

It is, of course, evident from what I have said that I am assuming that St. Luke the physician, the travelling companion of St. Paul, was the author of the Acts of the Apostles. I do so without feeling that such an assumption at the present time requires defence. In these lectures it is my aim, as far as possible, to avoid the mere collecting or comparing of other menâs opinions, or the balancing of the authority of one set of scholars against another. It is the results of personal investigation into the history of the Church in Rome in the first century that I am now specially desirous of bringing before you, not a recapitulation of what has recently been written about that history. My own experience has taught me that the only way to arrive at conclusions in historical questions satisfying to the historical conscience is to study the original authorities for oneself with an independent mind, using indeed all the light and all the suggestions that modern critical scholarship can throw upon the many problems and difficulties that have to be solved, but never accepting any of the so-called âresults of criticismâ without testing for oneself with the greatest care and at first hand the grounds on which they are supposed to rest.

The case for the Lucan authorship of the Third Gospel and of the Acts I consider however to have been so thoroughly established by the remarkable series of works published by Sir William M. Ramsay73 and Dr. Adolf Harnack74 upon the subject, as to have been placed, if not beyond the reach of controversyâfor alas! the spirit of controversy is not quickly laidâon a solid bedrock of reasoned and exhaustive argument against which the waves of controversy will beat in vain. And not merely have they proved the unity of authorship. They have shown that we have in St. Luke a cultured writer possessed of literary power and historical grasp and well acquainted with the details of Roman provincial administration and of the distinct characteristics, geographical and political, of different localities, who in a considerable part of his work speaks as an eyewitness, and who elsewhere uses first-hand evidence, if at times with a certain freedom, yet always with honesty and intelligence. My own conviction that the book of the Acts must have been written during St. Paulâs first captivity at Rome and completed before his release has long been firmly held, but this conviction has been strengthened and deepened by the extraordinarily powerful way in which Dr. Harnack75 has quite recently set forth in serried array the reasons which have slowly driven him to abandon his earlier prepossessions on this question, and forced him (in spite of the knowledge that he wasâto use his own wordsââcreating a revolution within the domain of criticismâ76 ) to fix on grounds alike of external and of internal evidence the end of St. Paulâs imprisonment as the date when the Acts, in the form we now possess the book, was finished.

It is needless to say that the acceptance of such a conclusion has a very important bearing on the subject of these lectures. For, if St. Luke wrote the Acts at Rome, the work must have been written in the first instance for the Roman Christians, but if so the question naturally arises, why should there be a total omission in the book of any reference to the founding of the Church in Rome or to the names of those who first preached the Gospel in that city? This is one of those silences of St. Luke, of which I have spoken already as being suggestive. A comparison of the last verses of the Third Gospel and of the Acts may help us to an answer.77 Had the Gospel stood alone all commentators and critics would have asserted unanimously that the Evangelist believed the Ascension of our Lord to have taken place on the evening of the day of the Resurrection.78 But from the opening passage of the Acts we learn that they would have been wrong, and that St. Luke in the conclusion of his Gospel deliberately foreshortened the events of six weeks in this way, because he intended to take up the thread of the story and fill in the details later. The. similar foreshortening of the events of two years, which we find in Acts xxviii. 30-1, suggests that St. Luke in writing this otherwise strangely puzzling and abrupt ending to his narrative had already planned in his mind a third book, which should supplement the Acts as the Acts had supplemented the Gospel, and that this book would have begun by taking up the account of Peterâs life-work, so sharply broken off at his release from prison, and that a brief sketch would have been given of the history of the Church in Rome previous to St. Paulâs two yearsâministry during his captivity.

With this preface let us now turn to those introductory chapters of the Acts in which St. Luke sketches for us the steps by which Christianity emerged from the condition of a strictly Jewish sect to that of a universal religion intended for all mankind. It will be seen that the enlargement of view, which is so clearly traced, was very gradual; that it came from below rather than from above; from the subordinates, to some extent from the rank and file, rather than from the acknowledged leaders. On the Great Day of Pentecost when St. Luke so carefully enumerates the various nationalities from which the great crowd of pilgrims was drawn, it should be noted that St. Peter addresses them as âMen of Israel,â and his whole discourse is that of a man concerned only with proving to an assembly of Jews that Jesus of Nazareth was the promised Messiah of their sacred Scriptures. The passage is in fact a striking testimony both to the wide extent of the Jewish Diaspora and to the fact of the intense love and reverence for the Holy City and for the injunctions of the Mosaic Law, which brought together such a throng of worshippers from far-distant regions, including people speaking many different tongues, to this feast at Jerusalem. In the list of those forming St. Peterâs audience we find the names of six different peoples and the inhabitants of nine different districts, and it is implied that Jews from these various places had come up specially for the occasionâwith one exception. The phrase âthe sojourning Romans, Jews as well as proselytesâ seems capable of only one interpretation, that St. Luke is here referring to a body of Roman Jews and converts to Judaism, who were temporarily residing in Jerusalem, and whom it may be permitted with considerable probability to identify with the âSynagogue of the Libertinesâ79 mentioned in Acts vi. 9. Among this body may have been numbered the Roman Christians Junias and Andronicus, who were some quarter of a century later saluted by St. Paul in his Epistle to the Romans âas men of mark among the Apostles and who were in Christ before me.â

In his record of the period that follows St. Luke makes it quite clear that the first organised Christian community was at Jerusalem, not in Galilee.80 After the day of Pentecost when certain of the multitude exclaimed âAre not all these that speak Galilaeans?ââthere is not a word in the Acts to indicate that the early Church had any connexion with Galilee. The Twelve, whose authority, as being derived directly from the Lord, no one called in question, made Jerusalem their headquarters from this time forward, and from this centre carried on their mission work. But that mission work was limited to. Jews. The Twelve, moreover, we are expressly told, visited the Temple regularly81and they seem to have...