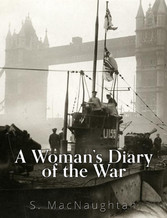 A Woman's Diary of the War

A Woman's Diary of the War

AS EVERY ONE NOW KNOWS, the life of the hospital was very brief, but while it lasted it was very satisfactory. I believe many wounded soldiers will remember with pleasure the big airy concert-hall and the pleasant garden which surrounded it. The hall and the garden always had a certain air of gaiety about them, in curious contrast to their present uses; but this was good for the men who had looked on far other sights not many miles away. Under the trees were groups of chairs and marble tables, reminiscent of ârefreshmentsâ and an open-air social life. The tables formed ward-tables afterwards; and in the wide, sunny balcony of the hospital the rows of chairs were always in use by convalescents, who used to shiver in the sunbeams, delicate still, and with horny hands rolled up dry tobacco in cigarette papers.

We must have been singularly fortunate in our patients, or else, as I shrewdly suspect, the Belgians are naturally good mannered. Their gratitude was shown in a thousand ways; but I believe nothing gave the hospital staff more pleasure than when it took the form of presenting Mrs. Stobart with a couple of handsome bronze medals in a case. She herself was much touched by this gift, and made a nice speech in return for it. Our patients seemed to consider that when they said, âJe suis trÃ¨s content de rester ici,â they might remain in the hospital as long as they liked; and indeed we should have been contented ourselves to have had them remain.

We grew fond of the patient, quiet, small men, who, even when they were in pain, were always grateful and always polite, and who seemed to have a genuine enthusiasm for England. Their âThank you verra mochâ was always spoken in English, out of compliment to their allies, I believe!

One wishes the pleasant useful time could have lasted longer. According to the newspapers, it was going to last indefinitely. And every day we read in the journals, âpour le reste, tout est calmeâ in Antwerp, while if oneâs own ears were to be believed, the sound of firing seemed to get nearer every day. We used to amuse ourselves at breakfast-time by asking for newspaper accounts of what was happening, and contrasting them with what we saw for ourselves, until at last even the newspapers admitted that the forts were âthreatened.â

I took a little carriage one afternoon and drove to the second line of fortifications. In Belgium, which is the muddiest country in the world, and where water lies long on the level roads, there is always a slightly raised track of stones in the middle of the streets, with a slough of mud on cither side of it. Subsequently, one knew these roadways well, and got accustomed to the sudden dives which motor cars and ambulances took when passing each other on the narrow ways; but at first one was puzzled to find oneself driving on cobbles right out into the country.

My knowledge of military matters is small indeed, and my knowledge of fortifications and constructions is even less; yet I must confess to a feeling of surpriseâfor which I offer excuses to those who know much better than myselfâwhen I saw the forts. I had always heard that Antwerp was one of the best-protected towns in the world, and, indeed, I had often heard it called impregnable; but the grass-grown ramparts and the old stone-built forts looked to my ignorant eyes like remnants of mediaevalism: it was impossible to think of them as being designed to stand a heavy siege of modern artillery; indeed, the impression that was conveyed to the mind was that of some slumbering old fortification, such as one is often taken to see because of its historic interest. I passed fields in which men were laboriously placing wooden stakes which, they told me, were put there to lame horses! And there seemed to linger about Antwerp a notion of cavalry charges up to the walls of the city. Even the wire entanglements looked like mere playthings, and quite unfit to stop hosts of marching men. Antwerp was shelled from six miles away! The wooden pegs, which looked as if some gardener was preparing to plant a field with bulbs, could be avoided by making a detour of one hundred yards on either side of them; and the wire entanglements no doubt were subsequently pulled up with one hand, and could hardly, it seemed to me, have stopped a regiment of schoolgirls armed with bonnet-pins.

I never saw the outer forts, but I enjoyed a survey of the inner ones, in much the same way in which one enjoys seeing oubliettes and drawbridges and loopholes for arrows, and other interesting remnants of a bygone system of defence. Cavalry advancing by road and through a ploughed field might have found Antwerp an awkward place to negotiate; otherwise I could not discover what the defences were for.

A few lines of trees had been cut down, while others had been spared, and a great many small gardens had been trampled out of existence, in preparation for an assault by 16-inch guns! The place seemed to my ignorant mind to be doomed beforehand, and no doubt that doom was hastened by treachery within the walls. A large German population is not easily or immediately sorted out at a crisis, and the fall of Antwerp, which took so many persons by surprise, could hardly, I think, have been unanticipated by those who were in the city.

On the 25th we began to hear the sound of guns, and one afternoon a Taube flew overhead. One grew well accustomed to the visit of these destructive birds in the weeks that followed, but this was the first one I had seen. They are singularly graceful in their flight, and it is difficult to connect their dove-like sailing overhead with dropped bombs and âsilent deathâ and destruction.

Our guns fired at the one which sailed over the hospital, and there was some little commotion in the street outside; while a piece of shrapnel fell through the roof of our hospital and considerably startled a wounded man beside whose bed it landed. The bursting shells looked like bits of cotton wool in the sky, and amongst them the Taube sailed away again, having had a look at us and laid an egg very rudely in our midst.

The firing could constantly be heard after this, and the work of the hospital became very heavy. Two orderlies always took turns in sitting up at night so as to be able to give a helping hand to the nurses and doctors, who were kept busy day and night. The bell at the street gate used to ring, and we knew that one vehicle, moving more slowly than the others that tore up and down the road, contained wounded men slung on stretchers behind the canvas tilt of the ambulance. Our work had developed into routine very quickly. We used to go down the long passage to the gateway, where a little crowd with a taste for horrors always assembled to see what could be seen, and here we received the different cases and took their names and regimental numbers before handing them over to the surgeons. Later, clothes had to be sorted and labelled, and sent to be disinfected and cleaned; and it became a work of some magnitude to empty the menâs pockets of their various treasures, and label and number them and put them away. The Belgian loves his small possessions, and carries about with him the most curious collection of things; and in his knapsack, whose principal merit might seem to be that it should be light, he often carries presents for all his family; and I have frequently been called upon to admire the silk scarves, the babyâs shoes, and the bottles of scent which they contained. In their greatcoats we used to find loaded revolvers side by side with sardine tins and candle ends and oddments of every description. They were all very pockety, and many of them were not of the sort that can be conveniently baked in a furnace; but I think we loyally looked after them all, and each patient got his queer goods when he was discharged.

We used to serve oxo to the men as soon as they were brought in, and we had hot water bottles ready for them. The worst of it all was that everything had to be done in the dark. Orders were compulsory about lights being turned out by eight oâclock, and after that hour a good deal of groping used to begin, and marble tables with unsuspected legs were frequently overturned with a crash. We used to hold electric torches for the doctors who were dressing wounds, and I think I have never seen such exhaustion as the soldiers showed. They often went to sleep while the bandages were being placed upon them, and I have even seen a man doze heavily while a cut in his forehead was being stitched.

The darkness and the want of water were the two baffling things about that time in Antwerp; and indeed the groping about, when the short days closed in, was one of the worst things about the whole winter. The Germans destroyed the reservoir near Antwerp, and all the water for the hospital and for our own men had to be fetched in buckets from a neighbouring well. We used to go out after supper, offering to carry things for each other as women will, and fill every available receptacle and carry them back to the two houses before going to bed.

About this time we got orders to evacuate the wounded; but later, when all the patients who could move were dressed, we were begged to remain and to keep the hospital open. The authorities told us frankly that the town would without doubt be bombarded, and that the Government, etc., were leaving; also that any of the hospital unit who wanted to return home were at liberty to do so. Only one or two took advantage of the permission, and the rest remained.

There was a certain sense of strain about the days that followed. The weather was...