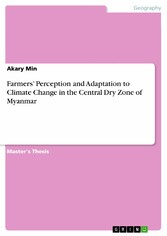 
Master's Thesis from the year 2017 in the subject Geography / Earth Science - Meteorology, Aeronomy, Climatology, grade: 1.5, University of Bonn (Faculty of Agriculture), course: Agricultural sciences and resource management in the tropics and sub-tropics, language: English, abstract: The Central Dry Zone covers about 13 % of Myanmar and is home to nearly a third of the total population of 52 million. The majority of households depend on agriculture-based income (83%). Besides low profitability, poor diversification, and high reliance on credit, these agricultural households are subject to additional stress by soil degradation, erratic rainfall patterns and extreme temperatures, and commodity price fluctuations. Particularly the climate change phenomena have become recently a major constraining factor for agricultural production in the Dry Zone. In this study we explore how farmers perceive agricultural problems in relation to climate change, and which strategies they apply to cope with and adapt agricultural practices to climate change based on traditional knowledge. Based on household surveys, participatory rural appraisals (PRA) and key-informant interviews it can be concluded that most farmers recognize climate change as a key constraint as they perceive their agricultural production being severely impacted, particularly by erratic rainfall. In response to increasingly frequent pre-monsoon droughts, some farmers have actually abandoned during the past 15 years cultivating rice as the main subsistence and market-crop, but also the cultivation of pre-monsoon crops such as sesame. Most farmers have traditionally been dealing with climatic risks by providing supplementary irrigation, e.g. by establishing tube wells, by cultivating short-cycled cash crop instead of rice, and by substituting annual crops by fruit orchards. Some farmers have done changes in cropping patterns and agronomic practices. These differentially affect adaptation to climate change and there are still needs of institutional support with the knowledge and technology for the unfinished-adaptation measures. There are the strong linkages between farmers' perceptions and their adaptation to climate risks at the farm level, and the adaptation measures are likely conducted on their own knowledge. Traditional knowledge and expert knowledge must be combined in order to work for successful adaptation to climate change.