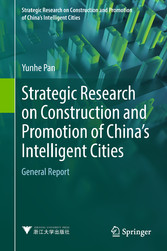 This book includes a general overview of the book series and summarizes the research results in its 13 subtopics. ItÂ systematically elaborates on how the construction and promotion of intelligent cities with Chinese characteristics could be implemented in the course of intelligent urbanization in China. Furthermore, it presents a variety of literature on urban management innovation and development, making it a valuable reference source on both the theoretic and empirical development of the new urbanization in China for intelligent-city decision-makers, c-level directors and officials in urban economy, social and environment departments and institutions all over the world.


Dr. Yunhe PAN is a member of the Chinese Academy of Engineering and also a professor at the College of Computer Science and Technology, Zhejiang University, China. His research areas include digital preservation of cultural heritage, digital libraries, and intelligent human animation.
Dr. PAN obtained his B.Sc. from Tongji University in 1970 and M.Sc. from Zhejiang University in 1981, and worked in Zhejiang University hence. From May 1995 to August 2006, Dr. PAN served as the President of Zhejiang University. He has been the Executive Vice President of Chinese Academy of Engineering since June, 2006. He became a member of the Chine
se Academy of Engineering in 1997. Dr. PAN was elected the member of the Standing Committee and the Chair of Foreign Affairs Committee of the 12th CPPCC in March, 2013. He is now member of Academic Degree Committee of State Council, President of China Invention Association, President of Innovation Design Alliance of China and Honorary President of China Society of Image and Graphics.
Dr. PAN is one of the earliest pioneers of Intelligent CAD and Computer Art in China. He has been long devoted to computer graphics, computer aided design, artificial intelligence and industrial design research and in charge of multiple major research projects in the fields of computer art, intelligent CAD, computer aided product innovation, virtual reality, digital heritage protection and digital library. Dr. PAN has published a large number of research papers and won many national and ministerial awards for his scientific research achievements.