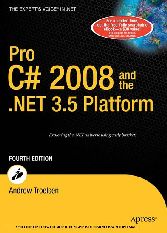 .NET 3.5 is Microsoft's largest development software launch since .NET 2.0 and (unlike .NET 3.0) completely replaces all previous .NET versions. A new version of Visual Studio - Visual Studio 'Orcas' is being created for the new Framework together with new versions of both the C# and Visual Basic languages. This book deals with this new C# language and provides developers with a complete treatise on the new technology - explaining the importance of all the new features (lambda expressions, LINQ, ASP.NET AJAX, WPF everywhere) and how they integrate into the framework of the previous .NET versions. It is a comprehensively revised and updated version of the author's previous award-winning titles.


Andrew Troelsen is a partner, trainer, and consultant at Intertech Inc., and is a leading authority on both .NET and COM. His book Pro C# 2005 and the .NET 2.0 Platform won the prestigious 2003 Referenceware Excellence Award and is in its third edition. Also of note are his earlier five-star treatment of traditional COM in the bestselling Developer's Workshop to COM and ATL mirrored in his book, COM and .NET Interoperability, and his top-notch investigation of VB .NET in Visual Basic .NET and the .NET Platform: An Advanced Guide. Troelsen has a degree in mathematical linguistics and South Asian studies from the University of Minnesota, and is a frequent speaker at numerous .NET-related conferences. He currently lives in Minneapolis with his wife, Amanda, and spends his free time investigating .NET and waiting for the Wild to win the Stanley Cup. You can check out his blog at AndrewTroelsen.blogspot.com.