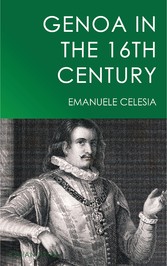 Genoa in the 16th Century

Genoa in the 16th Century

CATILINE AND FIESCHI COMPARED.âCATILINEâS AIMS OF A GENEROUS CHARACTER.âFIESCHI SOUGHT TO FREE HIS COUNTRY FROM THE SPANISH YOKE.âHISTORY UNJUST TO THE VANQUISHED.âSOURCES OF THIS HISTORY.âMATERIALS FOR THE FUTURE HISTORIAN OF ITALY.

It would be difficult to find in the history of the sixteenth century a name more fiercely assailed than that of Gianluigi Fieschi. From Bonfadio down to the most recent historians, the Count of Lavagna has received the same treatment at the hands of our writers which the learned vulgar are accustomed to give to Catiline. This levity of judgment is a new proof that history is too high a pursuit for servile minds.

The classic invectives of Cicero and the glittering falsehoods of Sallust, both written with masterly eloquence, and their echo taken up by inferior writers have disfigured the manly form of Sergius, and his cause, supported by the most generous and cultivated Romans, has come down to us described as the base plot of abandoned men.

Catiline could not have been base. He was illustrious by birth, well-known for his talents and powerful on account of his numerous dependants and friends. He stood on the last round of the ladder leading to the consulship and was supported by knights and senators; by Antonius Geta, Lentulus, Cethegus and even by CÃ¦sar who was no stranger to the conspiracy. Crassus favoured him, though he afterwards turned informer against the conspirators. Entire colonies and Municipalities supported him. In upper Spain, Gneus Piso, in Mauritania, Publius Sittius Nucerinus and the legions were his partisans; in fine, he was the head of all the reformers of Italy and Gaul.

I do not excuse his violence, his disorderly life and his vices; though we know of these only through his enemies. But his aims were unquestionably high and noble. Roman liberty was buried in his tomb and not even the dagger of Junius Brutus could recall her to life. I hold it incontestable that the movement, far from being a plot of reckless men, was general and spontaneous towards that freedom which Lucius Sylla had extinguished in blood; a movement for which there was crying urgency in Italy, where crowds of slaves were supplanting the Latin races, and throughout the dominions of the Republic. In vain have cunning rhetoricians taught us to execrate the name of the great Roman, the last of the Tribunes. He has left for history a page written with his own blood which is more lasting than all envy. It shows us one who fell dead on the same ground where he steadfastly fought, displaying in his last hour an heroism which is inconsistent with the crimes coupled with his name.

Cicero himself tells us that the friendship of Catiline had such fascinations that he had barely escaped its influence. It may be true that his pallid face, his fierce eyes and his nervous step, now quick, now slow, terrified the publicans and patricians of Rome; but none can believe that he butchered his own son, immolated victims to the silver eagle of Marius, or handed round in nocturnal conventicles a cup full of foaming blood. Catiline was a bad man because he was vanquished; but Salvator Rosa, the soldier and painter of Masaniello, when he drew Catiline as a stern and magnanimous man did not believe him a low plotter, and the great captain of our century declared that he preferred the part of the great Latin conspirator to that of the versatile Tully.

The character of the Count of Lavagna has been depicted in similar colours by servile writers skilful in inventing calumnies. Catiline and Fieschi had the same ambition and a common aim. The former, in his familiar letters to Lentulus which were published in the Senate, declared that no venal ambition led him to make war. He said that his estates were security for his debts and that the liberality and wealth of Orestilla and his daughter would provide for any deficiency. He averred, he was impelled by wrongs and slanders, that he made the cause of the unfortunate his own, because he was defrauded of the fruit of his labours, and, while he was falsely suspected, was forced to see base men taking his place.

The same is true of Fieschi, whose death, Gianettino Doria had sworn. In Genoa, not less than in Rome, a partisan contest between the nobles and the people had lasted for centuries. Here, after the civil conflagrations, as after the scourgings of Rome by Marius and Sylla, liberty gradually expired. In both Republics, the people were bowed down by the insolence of the great. They were deprived of all share in the government, and corrupt ambition had unbounded sway. In Liguria, Andrea Doria had completed the triumph of the party of the nobles and imperialists and the ruin of popular liberty. Though he forbore to assume a princely title, he was a true king in authority, his nephew aspired to regal honours, and every popular right was trampled down by the Spanish power. According to Bonfadio this subjection was too bitter for the great soul of the Count Lavagna long to endure the humiliation. But his enemies wrote, and by a thousand channels circulated, the most incredible things as parts of his designs:âThat he attempted by base intrigues to ruin the Republic, that he aimed to seduce it to servitude to his family or to France, to exterminate the Doria family, to lay bloody and felonious hands on the bank of St. George, to put the city to fire and sack. The decrees and official reports of the Republic do not warrant such statements, and a theory more honourable to him is justified by the gentleness of his character, by the Guelph traditions of his house, by the fact that he prevented the murder of Doria, in his palace, and by the conspiracy itself, the fury of which was directed against the ships of Doria, sparing those of the Republic.

It was necessary for Doria that black designs should be attributed to Fieschi, otherwise his fearful vengeance would have been unjustifiable. The slander was profitable also to the Spanish CÃ¦sar, for it took away from his path a powerful family opposed to the Aragonese power in Italy. And as matter of fact, these idle tales, written in Genoa and diffused in France and Spain, were never believed among us. The greater part of the patricians did not credit them for they were Fieschiâs friends and would have saved him if the overbearing spirit of Doria had not imposed his will upon the senate. Such slanders found no credit with the people, who placed their love upon that philanthropic family and perpetuated its memory in national songs.

Catiline and Fieschi intended to awaken in their native lands the love of expiring liberty, and in that aim they had the support of many nobles and of the people. The pride of Roman patricians could bend to an alliance with the people, but they scorned to share their rights with foreign slaves. The Count of Lavagna grasped the hand of the people, but he refused the alliance of France. This fact testifies for both to the honesty of their designs; for to a traitor all paths are good so they but lead to his end.

Catiline, slandered by Cicero upon the rostrum, fulminates in his turn against his detractor, and though he quits Rome unattended, his exit is imposing and momentous. Fieschi, bending to the necessities of his time, found more quiet and secret paths to his end; and when accused by the minister of CÃ¦sar with seeking to foment a revolution, he confronted Andrea Doria with a frankness which eluded the Admiralâs keen vigilance. From the blood of Catiline sprung the dictatorship of CÃ¦sar; from that of Fieschi, the oligarchic government and the Spanish dominion in Genoa.

Doria, becoming the supporter and partisan of Charles V. and Phillip II. prevented Genoa from entering into the league of the Italian Republics against the Spanish yoke. Genoa, united to the enemies of Florence and Siena in the time of those memorable sieges, allied with the enemies of Naples when that people was rising for liberty, the friend of all the enemies of Italy, dates from that period her unfortunate decline. The movement of Fieschi, if he had accepted the alliance of France, might have averted the catastrophe. The French and Republican league might have extirpated the Spanish power in the Peninsula, and saved Italy from forging her own chains. It might have spared Genoa her struggles with the Barbary states, the revolt of the Corsicans, the decline of her commerce with the East and the most disastrous of all her civil tumults.

The Genoese people struggled long against that fatal alliance, cemented with their blood, which Fieschi strove to break. They left no means untried to dissolve it, using now supplication, now the sword and the scaffold. And for more than two centuries, a half subdued populace never grew weary of pouring its indignant complaints into the ear of the nobility. I have compared Catiline and Fieschi. The resemblance has not escaped historians. But their works and discourses have been reported, and judged by their enemies and by the faction which they strove to displace from power. The name of Count Fieschi waits to be rehabilitated by time which cancels great wrongs, impartially dispenses praise and blame, and gives each man that place in the esteem of posterity which his works merit.

From the earliest times our country was lacerated by two hostile factions. There were annalists and writers who recorded and magnified the exploits of those belonging to their party and silently passed over the praiseworthy actions of their political opponents. Procopius and Iornandes represent the two creeds which in their time were contending for the support of the nation. Anastaius is the biographer of the Popes, as Paul Diacono...