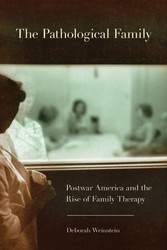 Pathological Family - Postwar America and the rise of family therapy

Pathological Family - Postwar America and the rise of family therapy

While iconic popular images celebrated family life during the 1950s and 1960s, American families were simultaneously regarded as potentially menacing sources of social disruption. The history of family therapy makes the complicated power of the family at midcentury vividly apparent. Clinicians developed a new approach to psychotherapy that claimed to locate the cause and treatment of mental illness in observable patterns of family interaction and communication rather than in individual psyches. Drawing on cybernetics, systems theory, and the social and behavioral sciences, they ambitiously aimed to cure schizophrenia and stop juvenile delinquency. With particular sensitivity to the importance of scientific observation and visual technologies such as one-way mirrors and training films in shaping the young field, The Pathological Family examines how family therapy developed against the intellectual and cultural landscape of postwar America.As Deborah Weinstein shows, the midcentury expansion of America's therapeutic culture and the postwar fixation on family life profoundly affected one another. Family therapists and other postwar commentators alike framed the promotion of democracy in the language of personality formation and psychological health forged in the crucible of the family. As therapists in this era shifted their clinical gaze to whole families, they nevertheless grappled in particular with the role played by mothers in the onset of their children's aberrant behavior. Although attitudes toward family therapy have shifted during intervening generations, the relations between family and therapeutic culture remain salient today.