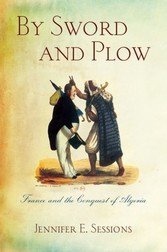 In 1830, with France's colonial empire in ruins, Charles X ordered his army to invade Ottoman Algiers. Victory did not salvage his regime from revolution, but it began the French conquest of Algeria, which was continued and consolidated by the succeeding July Monarchy. In By Sword and Plow, Jennifer E. Sessions explains why France chose first to conquer Algeria and then to transform it into its only large-scale settler colony. Deftly reconstructing the political culture of mid-nineteenth-century France, she also sheds light on policies whose long-term consequences remain a source of social, cultural, and political tensions in France and its former colony. In Sessions's view, French expansion in North Africa was rooted in contests over sovereignty and male citizenship in the wake of the Atlantic revolutions of the eighteenth century. The French monarchy embraced warfare as a means to legitimize new forms of rule, incorporating the Algerian army into royal iconography and public festivals. Colorful broadsides, songs, and plays depicted the men of the Armee d'Afrique as citizen soldiers. Social reformers and colonial theorists formulated plans to settle Algeria with European emigrants. The propaganda used to recruit settlers featured imagery celebrating Algeria's agricultural potential, but the male emigrants who responded were primarily poor, urban laborers who saw the colony as a place to exercise what they saw as their right to work. Generously illustrated with examples of this imperialist iconography, Sessions's work connects a wide-ranging culture of empire to specific policies of colonization during a pivotal period in the genesis of modern France.