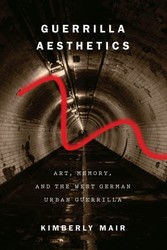 The violent operations performed in the 1970s by West German urban guerrillas - such as the Red Army Faction (RAF) - were so vivid and incomprehensible that it seemed to be more urgent to produce spectacle than to be politically successful. In Guerrilla Aesthetics, Kimberly Mair challenges the assumption that these guerrillas sought to realize specific political goals. Instead, she tracks the guerrilla fighters' plunge into an avant-garde-inspired negativity that rejected rationality and provoked the state. Focusing on the Red Decade of 1967 to 1977, which was characterized not only by terrorism and police brutality but also by counterculture aesthetics, Mair draws from archives, grey literatures, popular culture, art, and memorial and curatorial practices to explore the sensorial aspects of guerrilla communications performed by the RAF, as well as the 2nd of June Movement and the Socialist Patients' Collective. Turning to cultural and artistic responses to the decade and its legacy of raw public feelings, Mair also examines works by Eleanor Antin, Erin Cosgrove, Christoph Draeger, Bruce LaBruce, Gerhard Richter, and others. Reconsidering an enigmatic period in the history of terrorism, Guerrilla Aesthetics innovatively engages with the inherent connections between violence, performance, the senses, and memory.