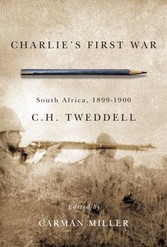 Charles Henry Tweddell (1869-1921) was one of several thousand Canadian soldiers who fought with British forces in the Second Anglo-Boer War (1899-1902). A methodical diarist, Tweddell recounts his year of service from the time he left Quebec City until his return. Tweddell's diary captures the sounds, sights, and stench of war, its friendships and rivalries, its routine and boredom, its death, disease, and injury. Readers are taken into the battlefield and the British military's disastrous medical services and facilities, and his month-long sight-seeing sick leave in London. Tweddell's diary suggests the allure of late nineteenth-century warfare, an appeal that drew many Boer War veterans, Tweddell included, to volunteer for service in the Great War that followed. Carman Miller's introduction presents a concise analysis of the Boer War's origins and its appeal to Canadian volunteers, and places the diarist within Quebec City's distinct society of overlapping religious, ethnic, and linguistic identities. Tweddell's diary, presented here in full for the first time, offers a rare and fascinating first-person account of Charlie's first war. It is a privileged insight into the fabric of late nineteenth-century military life, its opportunities, and personal costs, seen through the eyes of a perceptive observer and sympathetic raconteur.