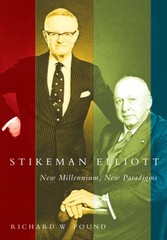 In its sixty-year existence, the Stikeman Elliott firm has played a role in many of the most significant transactions in Canadian business history, appearing before the major courts of the country in precendent-setting litigation. Its members are at the top of the legal profession and its reach is global. Clients include major foreign investors requiring advice for entry into Canada, as well as for investments in many other parts of the world. In Stikeman Elliott: The First Fifty Years, Richard Pound recounted how Heward Stikeman and Fraser Elliott developed their small tax boutique into a national and global organization. Here Pound details the firm's global expansion at a time of worldwide economic uncertainty. Embracing both diversity and corporate social responsibility, the organization's unwavering commitment to client confidentiality, knowledge management, and recruiting and retaining lawyers and staff of the highest quality has helped Stikeman Elliott retain its place as one of the preeminent business law firms in the country. An insightful look at recent innovations put into practice, Stikeman Elliott: New Millenium, New Paradigms offers an insider's view of a firm which has carved out an important role in Canadian legal and business history.