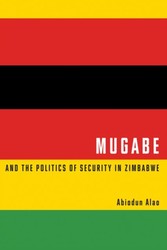 In 1980, the newly independent and democratic Zimbabwe was a beacon of hope in a troubled region. Three decades later, Zimbabwe became the focus of international attention for very different reasons: acrimonious racial relations, controversial elections, economic hardship, and military intervention in the Democratic Republic of the Congo. Mugabe and the Politics of Security in Zimbabwe argues that this unfortunate transition is intrinsically linked to the ways in which President Robert Mugabe used the politics of domestic and external security for his own gain. Abiodun Alao presents a comprehensive study of defense institutions, domestic security policy, and external use of military force during Mugabe's decades of rule. He identifies the role of personality in security and explains how the machinations of a self-perpetuating ruler shaped the economic and political dynamics of the struggling nation. He also provides analytical perspectives on Mugabe's transformations from a freedom fighter to a stable president of a relatively economically strong, independent country, and finally to an imprudent autocrat and international pariah. Nuanced, impassioned, and timely, Mugabe and the Politics of Security in Zimbabwe sheds new light on the effects of national security policy and develops a clear picture of the country's past, present, and future.