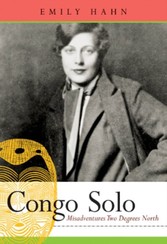 A woman who lived life on her own terms, Hahn was an unknown and struggling writer when Congo Solo was published. Here - restored to the form she had intended - is Hahn's unforgettable narrative, a vivid, provocative, and at times disturbing first-hand account of the racism, brutality, sexism, and exploitation that were everyday life realities under Belgium's iron-fisted colonial rule. Until now, the few copies of Congo Solo in circulation were the adulterated version, which the author altered after pressure from her publisher and threats of litigation from the main character's family. This edition makes available a lost treasure of women's travel writing that shocks and impresses, while shedding valuable light on the gender and race politics of the period.