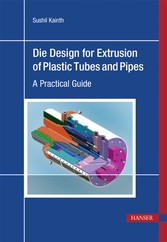 The purpose of the extruder to which the die is attached is to plasticize the granules (or powder, in some cases) of plastic into a homogeneous melt. The melt is pushed through the die to roughly the desired shape. The final finished product shape is formed by the downstream equipment, which consists of calibration, cooling, haul-off, and cutting equipment. In many instances, the same extruder and downstream equipment can be used for multiple products as long as the equipment has the capacity to produce the products. For instance, the extruder which makes pipes can be used for wire and cable coating, profiles, film, and sheet extrusion.

For every type of product mentioned above, a special die is required. A die which makes tubes of certain sizes will not be suitable for pipes of larger sizes. The terms "tube" and "pipe" are synonymous, with the difference being that any round and hollow section below 25 mm in diameter is known as tube and any above 25 mm in diameter is known as pipe. This definition of tube and pipe is not always followed, as hose pipes of 19 mm in diameter are not normally called hose tubes and conduit pipes of similar sizes are also not called conduit tubes. Nevertheless, the die which makes 20 mm tubes can make 30â35 mm pipes in some cases, but may not be suitable for 50 mm or greater diameters because of the differences in the geometry of the die, as is shown in Chapter 3.

Hence, for every type of product there has to be a special die. For this reason, there are tube dies, pipe dies, profile dies, film dies, sheet dies, etc. For each type of die design there are several different design aspects to be considered. Here the design aspects of tubes and pipes will be discussed in detail. Within the scope of designing these dies, monolayer and multilayer dies will also be explained.

Monolayer pipes and tubes are normally extruded through in-line (longitudinal) dies, and in special cases side-fed dies are used. Multilayer pipes and tubes are extruded through a combination of both in-line feed and side feed. Side-fed dies are called crosshead dies. Crosshead dies are also used when the products to be covered are fed through the middle of the dieâfor example, wire coating, cable covering, filament coating, pipe coating, etc.

The design aspects of some parts of different types of dies can be the same or similar and others can be quite different. A simple type of tube or pipe die is taken here to explain these differences, principles of design, and definition of the parts. This discussion can be extended to more complicated monolayer, multilayer, and crosshead dies.

A simple die with which most extrusion engineers are familiar is a mandrel support annular die, also known as a spider support die or simply a spider die, as shown in Figure 1.1.

There are several names for this type of die, such as mandrel support die, ring support die, spider supported die, or spider die. The latter is the most commonly used term in the industry and will be employed here throughout this discussion.

This type of die is normally used for extruding PVC or similar types of thermally unstable materials. For other materials that are not so heat sensitive, such as polyolefins (LDPE, HDPE, and PP), polyamides, and many more, a spiral type of distribution is recommended because of its superiority in homogenizing the flow of plastic melt in the die head, as shown in Chapter 5.

In a spider die, a melt stream of plastic from the extruder enters the die head through the breaker plate or connecting ring (not shown in Figure 1.1) into a round channel. The spider cone or torpedo spreads the melt into an annular shape, as shown in Figure 1.1, before it is divided into several sections by the spider legs. Then, these melt sections are joined together by the converging angles of the connecting mandrel (04), the connecting ring (05), the die bush (07), and the mandrel (08). Finally, the melt is forced through a parallel annulus (more commonly known as a die land) between the mandrel and the die.

The term "die head" is used for the complete unit to distinguish it from the die or, as sometimes referred to, the bush. The die or bush is a part of the die head that forms the outside shape of the product to be extruded. To avoid any confusion, the term "die" will be used for the part 07 of the die head and "pin" for the mandrel (08).

The names of the die head parts used here are commonly known in the extrusion industry, and almost everybody involved in plastics processing is familiar with the function of these parts. Nevertheless, a brief description of these parts is given here, and more details are given in Chapter 3.

The flange adapter (01 in Figure 1.1) is sometimes known as flange connection and, as the name implies, on one side this part forms a connection to the extruder flange. On the other side it is attached to the spider, which holds the whole die head together. At the extruder end there is a recess to locate on the breaker plate or connecting ring.

The flange adapter normally has a heater and a thermocouple probe fitted to control the temperature of the material in this region. In some cases, a pressure transducer to monitor the pressure in the die head is also incorporated in this part. The design of the flange adapter varies with the design of the other parts of the die and the geometry of the extruder flange to which it is fitted, as can be seen in Chapter 3 and Chapters 5 to 13.

The spider cone or torpedo (02 in Figure 1.1) is a conical part attached to the inner section of the spider. It is used for dividing the flow of melt from a round slug to an annulus form, which is pushed through the spider channels. The design of this part is discussed in Chapter 3.

The spider (03 in Figure 1.1) is the heart of this type of die head. It is a bridge between the flange adapter and the connecting ring on the outside, and the torpedo and the mandrel or pin on the inside. More importantly, it divides the melt stream into channels around the spider legs. The melt is again joined by the compression in the connecting ring and the mandrel or pin. The inside and outside annular part of the spider is kept together by the spider legs, the number of which varies between four and eight depending on the size of the die head. The gap between the outer ring and the inner sectionâin other words, the channel heightâis designed to suit the output required, considering ease of manufacturing and a minimum residence time for the melt. A narrow channel increases the pressure in the die head and is difficult to machine and polish. On the other hand, a large section height increases the residence time and reduces the shear rate, resulting in degradation of the heat sensitive materials in this region. The shape of the spider legs is designed to divide the flow of melt stream and to make it join easily in the chamber between the connecting ring and the pin, as shown in Figure 1.4.

The connecting mandrel (04 in Figure 1.1) is connected to the inner section of the spider on one end and the pin is connected to it on the other end. The shape and dimensions of this...