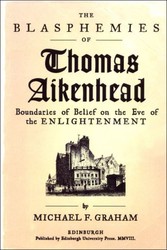 This is the first modern book-length study of the case of Thomas Aikenhead, the sometime University of Edinburgh student who in 1697 earned the unfortunate distinction of being the last person executed for blasphemy in Britain. Taking a micro-historical approach, Michael Graham uses the Aikenhead case to open a window into the world of Edinburgh, Scotland and Britain in its transition from the confessional era of the Reformation and the covenants, which placed high emphasis on the defence of orthodox belief, to the polite, literary world of the Enlightenment, of which Edinburgh would become a major centre.Graham traces the roots of the Aikenhead case in seventeenth-century Scotland and the law of blasphemy which was evolving in response to the new intellectual currents of biblical criticism and deism. He analyzes Aikenhead's trial and the Scottish government's decision to uphold the sentence of hanging. Finally, he details the debate engendered by the execution, carried out in a public sphere of print media encompassing both Scotland and England. Aikenhead's case became a media event which highlighted the intellectual and cultural divisions within Britain at the end of the seventeenth century.