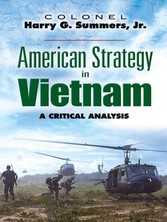 &quote,A masterful analysis of the strategy, or lack thereof, in the Vietnam War ...?a book that every policy maker in Washington should absorb.&quote, - Max Cleland, Atlanta Journal ConstitutionRequired reading at The National, Naval, and Air War Colleges, as well as other high level military institutions throughout the United States, American Strategy in Vietnam has become one of the most-well-respected investigations of the strategic and tactical?policies of the U.S. Army during the twentieth century. Crackling with keen insight and clarity, this invaluable resource has renewed the study of strategy and its vital relationship to the art of war.Drawing heavily on the brilliant theories of the great Prussian general Carl von Clausewitz, this is the definitive politico-military assessment of the Vietnam War. Instead of merely examining the individual strategic flaws of the conflict, the book embraces a larger scope: how the weak relationship between military strategy and national policy led to the Vietnam War's unpopular and faulty definition--and eventual failure. Particularly relevant today, this important expos stresses the futility of any military action without the full support and involvement of the country's people.