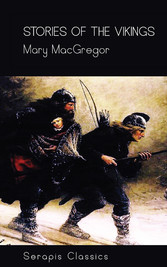 Stories of the Vikings (Serapis Classics)

Stories of the Vikings (Serapis Classics)

On a summer day nearly twelve hundred years ago, three ships with bright red sails drew near to one of the little ports of the Dorset coast in the south of England. The townsfolk saw the ships, and paying no heed to the bright sails, said carelessly one to another, 'The merchantmen will be in port to-day.' And the harbour-master gathered together a few of his men and hastened to the quay. For he, too, had seen the ships, and, as in duty bound, he went to meet them, to demand from the captains the port taxes which were lawfully due to the king. But townsfolk and harbour-master alike had made a grievous mistake that summer day. For, as they soon discovered to their cost, and as the red sails might have forewarned them, the three ships were no peaceful merchantmen. No sooner had the vessels drawn up along the quay than a wild, strange-looking crew sprang to the shore, drew their swords, and speedily slew the harbour-master and his few unarmed followers. They then entered the town, plundering and burning the houses of all, both rich and poor. Leaving the little town in ruins, the strange crew, dragging their booty with them, marched down again to the quay. There they embarked, and without delay sailed away out to sea. Perhaps you have already guessed that the strange crew was a Viking band, that the three ships were Viking ships. So, indeed, they were, and this summer day in the year seven hundred and eighty-nine was the first time that the wild Northmen had been seen in England, or in any part of Europe where the 'White Christ' was worshipped...