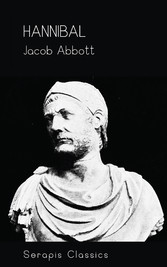 HANNIBAL was a Carthaginian general. He acquired his great distinction as a warrior by his desperate contests with the Romans. Rome and Carthage grew up together on opposite sides of the Mediterranean Sea. For about a hundred years they waged against each other most dreadful wars. There were three of these wars. Rome was successful in the end, and Carthage was entirely destroyed. There was no real cause for any disagreement between these two nations. Their hostility to each other was mere rivalry and spontaneous hate. They spoke a different language; they had a different origin; and they lived on opposite sides of the same sea. So they hated and devoured each other...