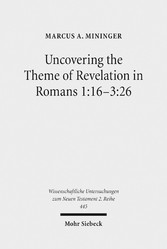 Uncovering the Theme of Revelation in Romans 1:16-3:26 - Discovering a New Approach to Paul's Argument

of: Marcus A. Mininger

Uncovering the Theme of Revelation in Romans 1:16-3:26 - Discovering a New Approach to Paul's Argument


Past study of Rom 1:16-3:26 focuses on individual salvation or on social relations and also produces a host of interpretative quandaries. Marcus A. Mininger develops a new approach, which includes but goes beyond these foci, by unearthing the theme of revelation that runs throughout Paul's argument largely unnoticed. More than a proof of sin or of social equality, Paul provides a survey of numerous visible revelations, in which otherwise invisible realities like God's wrath, the power of sin, and God's righteousness are seen through the observable effects they produce in different people. Read this way, the rationale of Paul's argument becomes quite clear, including for 'problem texts' like Rom 2 and 3:1-8, as Paul proves that the gospel, not the law, overcomes sin's power and that God's righteousness always exists in contrast to the human condition in this age.
'[This is] an unusually interesting and original piece of work. [Its] interaction with current literature is impressively thorough and fair; the argumentation, which never loses sight of the text itself, is cogent and comprehensive. [...] All in all, frankly, this is one of the most satisfying dissertations (published or unpublished) that I recall ever reading. I hope it gets the attention it deserves.'
MoisÃ©s Silva, former Mary French Rockefeller Distinguished Professor of New Testament at Gordon-Conwell Theological Seminary