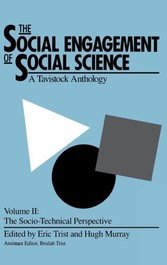 World War II brought together a group of psychiatrists and clinical and social psychologists in the British Army where they developed radical, action-oriented innovations in social psychiatry. They became known as the &quote,Tavistock Group&quote, since the core members had been at the pre-war Tavistock Clinic. They created the post-war Tavistock Institute of Human Relations and expanded on their wartime achievements by pioneering a new mode of relating theory and practice, called in these volumes, &quote,The Social Engagement of Social Science.&quote,There are three perspectives: the socio-psychological, the socio-technical, and the socio-ecological. These perspectives are interdependent, yet each has its own focus and is represented in a separate volume.The Institute's dynamic social science approach to industrial problems, presented in this second volume, began with Eric Trist's coal-mining program for the development of more productive and personally satisfying self-regulating forms of work organization. The whole &quote,Quality of Life&quote, movement owes its theoretical and empirical basis to this pathfinding endeavor.Volume I, The Socio-Psychological Perspective, extended the object-relations approach in psychoanalysis to group, organizational, and wider social life. This extension is related to field theory, the personality/culture approach, and open systems theory. Action-oriented papers deal with key ideas in social psychiatry, varieties of group process, new paths in family studies, the dynamics of organizational change, and the unconscious in culture and society.Volume III will focus on non-hierarchical forms of organization facilitating inter-organizational relations in complex and rapidly changing environmentsthe socio-ecological perspective. This perspective is offered as a guide to institution building for the future.