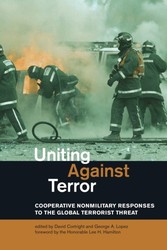 As terrorist attacks continue around the world, from London and Madrid to Afghanistan and Iraq, questions multiply about the effectiveness of current antiterrorist strategies. America's reliance on military approaches and the Bush administration's avowal of a constant state of war have overshadowed nonmilitary, multilateral efforts, and there has been an analogous neglect of these alternative strategies in the literature on terrorism. Uniting Against Terror fills this gap, examining and evaluating post-9/11 cooperative nonmilitary responses to the global terrorist threat, with a particular focus on efforts of the United Nations, the Financial Action Task Force, the European Union, and a wide array of multilateral institutions. Uniting Against Terror argues that defeating the global terrorist threat requires engaging international financial, diplomatic, intelligence, and defense communities and law enforcement organizations in an atmosphere of cooperation. It examines cooperative diplomatic and economic policies to address the changing face of terrorism and the global Al Qaida threat, differentiates between protective measures and long-term preventive policies, and makes recommendations for effective cooperative nonmilitary strategies. Included are chapters that analyze the UN and its role, the unique blend of sanctions and diplomacy that convinced Libya to end its support of terrorism, efforts to halt the financing of terrorist networks, and an account of the European Union's unified ",Plan of Action", against terrorism.ContributorsStephanie Ahern, Oldrich Bures, David Cortright, Kathryn L. Gardner, Linda Gerber-Stellingwerf, Jason Ipe, George A. Lopez, Thomas E. McNamara, Alistair Millar, Eric Rosand David Cortright is a Research Fellow at the Joan B. Kroc Institute for International Peace Studies at the University of Notre Dame and President of Fourth Freedom Forum. George A. Lopez is Senior Fellow and Professor of Political Science at the Joan B. Kroc Institute for International Peace Studies. Cortright and Lopez have edited several other books together, including, most recently, Smart Sanctions: Targeting Economic Statecraft.