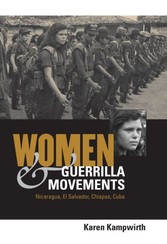 The revolutionary movements that emerged frequently in Latin America over the past century promoted goals that included overturning dictatorships, confronting economic inequalities, and creating what Cuban revolutionary hero Che Guevara called the new man. But, in fact, many of the new men who participated in these movements were not men. Thousands of them were women. This book aims to show why a full understanding of revolutions needs to take account of gender. Karen Kampwirth writes here about the women who joined the revolutionary movements in Nicaragua, El Salvador, and the Mexican state of Chiapas, about how they became guerrillas, and how that experience changed their lives. In the last chapter she compares what happened in these countries with Cuba in the 1950s, where few women participated in the guerrilla struggle. Drawing on more than two hundred interviews, Kampwirth examines the political, structural, ideological, and personal factors that allowed many women to escape from the constraints of their traditional roles and led some to participate in guerrilla activities. Her emphasis on the experiences of revolutionaries adds a new dimension to the study of revolution, which has focused mainly on explaining how states are overthrown.