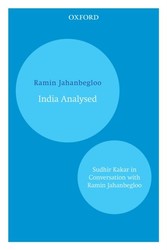 Based on interviews of Sudhir Kakar by Iranian philosopher Ramin Jahanbegloo, India Analysed is a journey into Kakar's mind-his fertile and unpredictable ways of thinking, and the essential humanism which all his writings signify-recounting the life and ideas of Kakar in his own words. In the process, the book affords readers rare insights into the psychological make-up of the modern Indian. Flowing effortlessly from Kakar's descriptions of his early life in undivided India to discussions on the Indian psyche and sexuality, the book also dwells on his views on secularism and modern Indian leaders like Gandhi and Nehru. Kakar brings to bear his intellect on a wide range of issues like philosophy, democracy, Indian culture and tradition, and the Partition, and the conversational style of the interviews helps demystify many of his complex ideas. The third in the series of Ramin Jahanbegloo's interviews of prominent intellectuals who have influenced modern Indian thought, this challenging and engaging volume will interest both a scholarly and an informed lay audience who want to understand India as seen through the eyes of one of the country's leading contemporary thinkers.