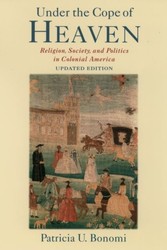 Under the Cope of Heaven - Religion, Society, and Politics in Colonial America

of: Patricia U. Bonomi

Under the Cope of Heaven - Religion, Society, and Politics in Colonial America

In this pathbreaking study, Patricia Bonomi argues that religion was as instrumental as either politics or the economy in shaping early American life and values. Looking at the middle and southern colonies as well as at Puritan New England, Bonomi finds an abundance of religious vitality through the colonial years among clergy and churchgoers of diverse religious background. The book also explores the tightening relationship between religion and politics and illuminates the vital role religion played in the American Revolution. A perennial backlist title first published in 1986, this updated edition includes a new preface on research in the field on African Americans, Indians, women, the Great Awakening, and Atlantic history and how these impact her interpretations.