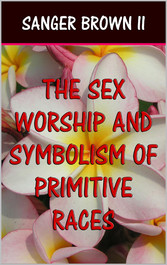 The Sex Worship and Symbolism of Primitive Races

The Sex Worship and Symbolism of Primitive Races

PSYCHIATRY, during recent years, has found it to its advantage to turn to related sciences and allied branches of study for the explanation of a number of the peculiar symptoms of abnormal mental states. Of these related studies, none have been of greater value than those which throw light on the mental development of either the individual or the race. In primitive races we discover a number of inherent motives which are of interest from the standpoint of mental evolution. These motives are expressed in a very interesting symbolism. It is the duty of the psychiatrist to see to what extent these primitive motives operate unconsciously in abnormal mental conditions, and also to learn whether an insight into the symbolism of mental diseases may be gained, through comparison, by a study of the symbolism of primitive races. In the following discussion one particular motive with its accompanying symbolism is dealt with.

A great many of the institutions and usages of our present day civilization originated at a very early period in the history of the race. Many of these usages are carried on in modified form century after century, after they have lost the meaning which they originally possessed; it must be remembered, however, that in primitive races they were of importance, and they arose because they served a useful end. From the study of these remnants of former days, we are able to learn the trends of thought which activated and inspired the minds of primitive people. When we clearly understand these motives, we may then judge the extent of their influence on our present day thought and tendencies.

It has only been during comparatively recent times that the importance of primitive beliefs and practices, from the standpoint of mental evolution, has been appreciated. Formerly, primitive man was regarded merely as a curiosity, and not as an individual from whom anything of any value whatever was to be learned. But more recent studies have changed all this. In order to illustrate this matter of the evolution and development of the human mind we can very profitably quote from Sir J. G. Frazer:[1] 'For by comparison with civilized man the savage represents an arrested or rather a retarded state of social development, and an examination of his customs and beliefs accordingly supplies the same sort of evidence of the evolution of the human mind that an examination of the embryo supplies of the evolution of the human body. To put it otherwise, a savage is to a civilized man as a child is to an adult; and just as a gradual growth of intelligence in a child corresponds to, and in a sense recapitulates, the gradual growth of intelligence in the species, so a study of savage society at various stages of evolution enables us to follow approximately, though of course not exactly, the road by which the ancestors of the higher races must have travelled in their progress upward through barbarism to civilization. In short, savagery is the primitive condition of mankind, and if we would understand what primitive man was we must know what the savage now is.'