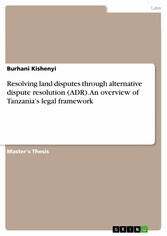 
Master's Thesis from the year 2017 in the subject Law - Comparative Legal Systems, Comparative Law, , course: Master of Laws in Mediation and Arbitration, language: English, abstract: Upon reform of land laws in 1999 following the National Land Policy of 1995 the new system for adjudication on land disputes aimed at adopting a procedure which is not tied to legal technicalities and that which is not strictly bound by rules of practice or procedure but which aims at delivering substantial justice. That's why land laws embody some forms of ADR. The main purpose of this study was therefore to examine the effectiveness of ADR legal framework in Tanzania and how useful it is in resolving land disputes. ADR processes currently in use in Tanzania are critically examined and their shortcomings reviewed. The legal framework for ADR and the role they play in providing the supporting structure for land dispute resolution are evaluated. Future prospects for ADR are indicated and recommendations for successful implementation of ADR in resolving land disputes are given. The study has revealed that despite the specialized court system for land disputes settlement there is no distinct legal regime for use of ADR at all levels of land dispute settlement machinery. The only method of ADR in use at the High Court level is mediation through court annexed mediation like in any other civil cases though there are no procedural Rules guiding the same. Negotiation is rarely used where parties to the dispute opt to resolve the matter out of court and then file a deed of settlement in court.