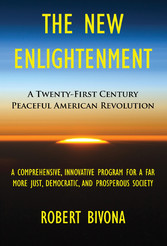 The New Enlightenment details 34 public policies that will, if instituted: Lift tens of millions of Americans out of poverty to a standard of living that now exists in the middle class; substantially improve the standard of living of tens of millions more; fundamentally improve our election and lobbying systems; enhance democracy with an innovative, new democratic system; create a $500 billion annual federal surplus; increase GDP by $1.8 trillion. Costs or revenue gains resulting from instituting each policy is included. Abuse of monopoly power and defects in our corporate form and political system are resulting in vast wealth in a tiny elite, which will be inherited. We are creating a new aristocracy with unprecedented wealth and therefore power. The six Walmart heirs' have more wealth than the poorest 133 million Americans combined. Much of their $145 billion results from paying over half of their workforce below a living wage. Productivity has doubled since 1979 while wages have stagnated or declined for the majority in a process directing vast wealth to a small elite. These conditions are fundamentally unjust, and the further they are allowed to advance the more difficult they will be to resolve. Our nation was born in the Age of Enlightenment when extreme economic and political inequalities motivated revolutions. Today, through peaceful means, we again require radical change for similar reasons. If those with extreme wealth lived isolated on a wilderness island they would have little or no wealth. Our society allows, and is an active participant in, wealth creation. Where is the appropriate degree of gratitude? Using tax policies that return a just and moderate portion of extreme wealth and income to the source of the resources responsible for creating it, society, The New Enlightenment details how our society can be fundamentally beneficially transformed.