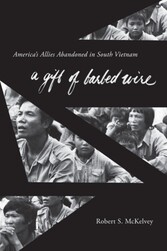 A Gift of Barbed Wire is a penetrating look at the lives of South Vietnamese officials and their families left behind in Vietnam after the fall of Saigon in 1975. A former Marine who served in Vietnam, Robert McKelvey went on to practice psychiatry and, through his work in refugee camps and U.S. social service organizations, met South Vietnamese men from all walks of life who had been imprisoned in re-education camps immediately after the war. McKelveys interviews with these former political prisoners, their wives, and their children reveal the devastating, long-term impact of their incarceration.From the early years in French colonial Vietnam through the Vietnam War, from postwar ordeals of re-education camps, social ostracism, and poverty to eventual emigration to the United States, this collection of narratives provides broad and highly personal accounts of individuals and families evolving against the backdrop of war and vast social change.Some of the people interviewed for the book eventually reached the United States as boat people fleeing Vietnam in unsafe vessels, others arrived, after rigorous screening, through U.S. Government-sponsored programs. But even in the safety of the United States they had to begin anew, devoting all their remaining energies to survival.While crediting the courage and resilience of these families, McKelvey holds a critical mirror up to our culture, exploring the nature of our responsibility to our allies as well as the attitudes that obscured the reality of war as ",a grinding, brutal interplay of complex forces that often develops a sustaining energy and momentum of its own, driving us in directions that we neither anticipated nor desired.",