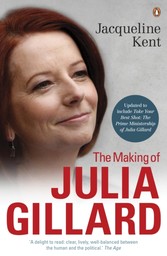 The first biography of Australia's first female Prime Minister. Julia Gillard has always been an exceptional figure in Australian politics, widely admired by her adversaries as well as in the electorate. And now she is also an exceptional figure in Australian history: the first woman to be this country's Prime Minister. The path to power has been far from smooth. Gillard's career has been marked by pitched battles with jealous rivals and powerful factions. But as she herself has observed, 'I am proof that a woman can thrive in an adversarial environment.' Drawing on interviews with her friends and foes and with Julia Gillard herself award-winning biographer Jacqueline Kent gives us the first thorough account of her career before she challenged for the top job. It describes Gillard's Adelaide childhood, her time as a fiery student activist, her battles to get into Parliament and her relationships with the important men in her political life: Simon Crean, Kim Beazley, Mark Latham and Kevin Rudd. The Making of Julia Gillard is an insightful and immensely readable account of this remarkable woman, how adversarial her environment has been and how she has thrived. 'She fascinates us, not just because she is the first to be where she is but because she is so good. This book will be eagerly devoured by those who want to know more about her.' Anne Summers, Sydney Morning Herald