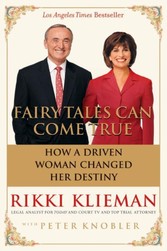 The riveting memoir of Rikki Klieman--an enormously successful defence attorney and television personality--as she discovers the possibilities of love in middle age with Los Angeles' new police commissioner, Bill Bratton. Thirty-five-year-old Rikki was named one of America's top five female trial attorneys by Time magazine for her work in criminal defence, one of the toughest branches of law for a woman to enter. She defended clients ranging from accused drug smugglers to media moguls to well-meaning Christian Scientists Ginger and David Twitchell, whose beliefs were put on trial after the death of their child. She waged a war of nerves with Boston police and the FBI during negotiations for the return of fugitive sixties radical Katherine Ann Power.As Rikki moved from success to success, however, the frenetic lifestyle of a defence attorney began to damage her health and happiness. She suffered from exhaustion, chronic back pain, and two failed marriages, but considered these afflictions to be part of "the price of the prize." After several decades as a practicing attorney, she joined Court TV, where she gained national prominence covering the O.J. Simpson trial and she went on to host Court TV's daily show Both Sides.Now, at midlife, this warrior with a woman's heart has finally achieved, in her loving marriage to LAPD chief Bill Bratton, the balance many seek but few find. Her dramatic story proves that fairy tales can come true and that great love and great success can go hand in hand.