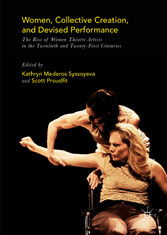 Women, Collective Creation, and Devised Performance - The Rise of Women Theatre Artists in the Twentieth and Twenty-First Centuries

Women, Collective Creation, and Devised Performance - The Rise of Women Theatre Artists in the Twentieth and Twenty-First Centuries

This book explores the role and centrality of women in the development of collaborative theatre practice, alongside the significance of collective creation and devising in the development of the modern theatre.
Tracing a web of women theatremakers in Europe and North America, this book explores the connections between early twentieth century collective theatre practices such as workers theatre and the dramatic play movement, and the subsequent spread of theatrical devising. Chapters investigate the work of the Settlement Houses, total theatre in 1920s' France, the mid-century avant-garde and New Left collectives, the nomadic performances of Europe's transnational theatre troupes, street-theatre protests, and contemporary devising. In so doing, the book further elucidates a history of modern theatre begun in A History of Collective Creation (2013) and Collective Creation in Contemporary Performance (2013), in which the seemingly marginal and disparate practices of collective creation and devising are revealed as central-and women theatremakers revealed as progenitors of these practices.

A theatre director, teacher and scholar, Kathryn Mederos Syssoyeva's publications include A History of Collective Creation and Collective Creation in Contemporary Performance (2013). Work in development includes Meyerhold and Stanislavsky at Povarskaya Street: Art, Money, Politics, and the Birth of Laboratory Theatre.

Scott Proudfit is Assistant Professor in English at Elon University, USA. Previously, he worked as an editor for Back Stage and Back Stage West, while collaborating with the Actors' Gang, the Factory Theater, and Irondale Ensemble Project.  He was associate editor of A History of Collective Creation and Collective Creation in Contemporary Performance (2013).