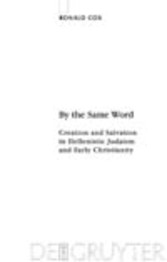 This study compares writings from Second Temple Judaism, the New Testament and Gnosticism that adopt the Middle Platonic tri-partite view of reality, with its transcendent One, its cosmologically active intermediary, and its material realm, in their efforts to explain the relationship between the Deity and the physical cosmos. The study shows that these Jewish, Christian and Gnostic writings take up this intermediary doctrine to different ends, reflecting their distinctive views about creation and humanity’s place therein.