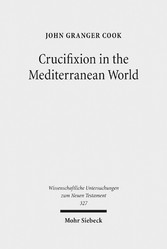 Crucifixion in the Mediterranean World

Crucifixion in the Mediterranean World


To understand the phenomenon of Roman crucifixion, John Granger Cook argues that one should begin with an investigation of the evidence from Latin texts and inscriptions (such as the lex Puteolana [the law of Puteoli]) supplemented by what may be learned from the surviving archaeological material (e.g., the Arieti fresco of a man on a patibulum [horizontal beam], the Puteoli and Palatine graffiti of crucifixion, the crucifixion nail in the calcaneum bone from Jerusalem, and the Pereire gem of the crucified Jesus [III CE]). This evidence clarifies the precise meaning of terms such as patibulum and crux (vertical beam or cross), which in turn illuminate the Greek terms [e.g., ???????, ??????? and ??????????] and texts that describe crucifixion or penal suspension. It is of fundamental importance that Greek texts be read against the background of Latin texts and Roman historical practice. The author traces the use of the penalty by the Romans until its probable abolition by Constantine and its eventual transformation into the Byzantine punishment by the furca (the fork), a form of penal suspension that resulted in immediate death (a penalty illustrated by the sixth century Vienna Greek codex of Genesis). Cook does not neglect the legal sources - including the question of the permissibility of the crucifixion of Roman citizens and the crimes for which one could be crucified. In addition to the Latin and Greek authors, texts in Hebrew and Aramaic that refer to penal suspension and crucifixion are examined. Brief attention is given to crucifixion in the Islamic world and to some modern forms of penal suspension including haritsuke (with two photographs), a penalty closely resembling crucifixion that was used in Tokugawan Japan. The material contributes to the understanding of the crucifixion of Jesus and has implications for the theologies of the cross in the New Testament.