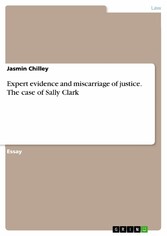 Expert evidence and miscarriage of justice. The case of Sally Clark

Expert evidence and miscarriage of justice. The case of Sally Clark

Essay from the year 2015 in the subject Law - Penology, grade: 81, University of the West of England, Bristol, course: Forensic Computing and Security, language: English, abstract: This essay examines the role of expert evidence in court decisions and subsequent miscarriage of justice. To this end, it takes a look at the case of Sally Clark, who was initially convicted for murdering her two infant children and later cleared of the charges. A miscarriage of justice is an ambiguous phase that is capable of instigating many distinctive meanings, interpreted and influenced by life experiences. The widely considered definition is a failure to attain justice. However this undermines The Criminal Justice System who robustly endeavours to convey justice for all, by convicting the guilty and protecting the innocent. Unfortunately this ambition is belittled by the never-ending statistic that defendants are still being wrongfully imprisoned this is because some experts are culprits of fabricating and concealing evidence. Sally Clark's trial replicates similar characteristics.