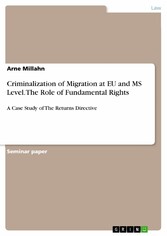 Criminalization of Migration at EU and MS Level. The Role of Fundamental Rights - A Case Study of The Returns Directive

Criminalization of Migration at EU and MS Level. The Role of Fundamental Rights - A Case Study of The Returns Directive

Seminar paper from the year 2013 in the subject Law - European and International Law, Intellectual Properties, grade: 2, University of Twente , course: European Union Law, language: English, abstract: Third-Country Nationals (TNCs) have a distinct legal standpoint in the Treaties as part of the Area of Freedom, Security and Justice (AFSJ). Within the more general context of the often mentioned conflict between Freedom and Justice, on the one hand, and Security, on the other, one can more specifically view the TNCs' situation as being determined by the balance between the interest of the state to maintain public security and the rights of the individual. The sociological discourse has claimed that migration is perceived as a threat to national sovereignty, a perception that should predominantly shape the 'management of migration flows'. This policy has been termed a 'securitization' of migration. Both on the EU level and on the MS level the policy paradigm has resulted in the criminalization of irregular migration, which has been conceptualized as 'crimmigation' in the literature. On the EU level this has taken the form of efforts to deport migrants from the Union's territory. This paper will focus on Directive 2008/115/EC (the Returns Directive). Besides the developments at EU level, the MSs have retained and excluded the Union's competences from measures concerning national security. According to Article 72 TFEU, the EU may not impose measures on MSs within the AFSJ that affect 'the maintenance of law and order and the safeguarding of internal security'. On this basis, several MSs have enacted additional legislation that imposes criminal sanctions on irregular migrants. This has led to conflicts before the ECJ about their compatibility with EU law. The two countries in this regard were France and Italy. The criminalization of migration in these countries is therefore of special interest to this paper. The irregular TNC thus faces a migration regime that is largely determined on the MS level but coordinated to a certain extent at the EU level. First of all this has implications for the extent of his criminalization. Within the overlap of EU and national competence in this field, to what extent can MSs impose additional sanctions on irregular migrants? Secondly this concerns the scope of Fundamental Rights. To what extent are MSs allowed to intrude on the personal liberty of the TCN in the control of migration?