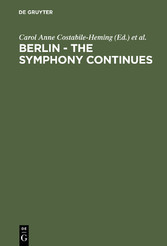 The sudden fall of the Berlin Wall is one of the defining images of the late twentieth century. The subsequent unification of Germany and the decision to return Berlin to its status as capital has made the constant changes within the city a matter of public interest. It also offered Berlin the opportunity to create a new image for itself, one that can serve as a counterbalance to the politically charged recent history of Berlin as the capital of Nazi Germany and former East Berlin as the capital of the German Democratic Republic. Poised between capitalist Western Europe and the former communist powers in Eastern Europe, Berlin occupies a fascinating geopolitical space. This anthology presents a unique glimpse into the various constituencies that make up Berlin and that impact the city's challenges and promises.