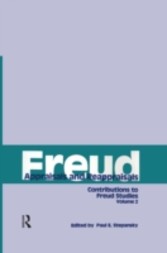 Volume 2 of the Freud: Appraisals and Reappraisals series bears out the promise of the acclaimed premier volume, a volume whose essays ",breathe new life into the study of Freud,", embodying research that ",appears to be impeccable in every case", (International Review of Psychoanalysis). It begins with Peter Homan's detailed reeexamination of the period 1906-1914 in Freud's life. Looking to Freud's relationahips with Jung as the central event of the period, he finds in Freud's idealization and subsequent de-idealization of Jung a psychological motif that gains recurrent expression in Freud's later writings and personal relationships. Richard Geha offers a provocative protrait of Freud as a ",fictionalist.", Anchoring his exegesis in Freud's famous case of the Wolf Man, he argues that the yield of Freud's clinical inquiries, epistemologically, is a species of the fictionalism of Friedrich Nietzsche and Hans Vaihinger. But, pursuing the argument, Geha goes on to advance little-noted biographical evidence that Freud understood himself to be an artist whose clinical productions were ultimately artistic. Finally, Patricia Herzog organizes and interprets Freud's seemingly conflicting remarks about philosophy and philosophers en route to the claim that the long-held belief that Freud was an ",anti-philosopher", is a myth. In fact, she claims, ",Freud was in no doubt as to the philosophical nature of his goal.", In an introductory essay titled ",Pathways to Freud's Identity,", editor Paul E. Stepansky brings together the essays of Homans, Geha, and Herzog as complementary inquiries into Freud's putative self-understanding and, to that extent, as reconstructive, historical continuations of the self-analysis methodically begun by Freud in the late 1890s. ",Each contributor,", writes Stepansky, ",in his or her own way, seeks to understand Freud better in the spirit in which Freud might have better understood himself. Together, the contributors offer vistas to an enlarged self-analytic sensibility.",