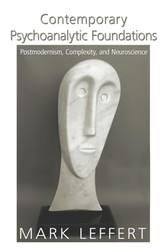 Past scholars have tried to classify psychoanalysis as an intrinsically positivist science, with varying degrees of success. Their critics have fared little better with narrow applications of postmodern thought, which focus on smaller areas within psychoanalysis and, as a result, neglect the evolution of the discipline as a whole. In an effort to provide a ground for current psychoanalytic thought, Mark Leffert creates an interreferential schema which balances the influences of postmodernism, complexity theory, and neuroscience as its key factors. Using the heterogeneity of postmodern thought as a starting point, he traces its impact on and implications for the development of the discipline, leading into the realm of complexity theory - which is relatively new to the psychoanalytic literature - and how it informs as well as constrains certain psychoanalytic assumptions. The book then turns to neuroscience, the ",hard", scientific study of the complexities of the brain, and how recent research informs psychoanalytic theory and may shed light on aspects of memory, the conscious, and the unconscious. Taken together, these three elements create a firm basis for the current trends in psychoanalysis and the direction of its development in the years to come.