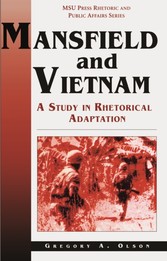 Mansfield and Vietnam - A Study in Rhetorical Adaptation

of: Gregory A. Olson

Mansfield and Vietnam - A Study in Rhetorical Adaptation

Mansfield and Vietnam: A Study in Rhetorical Adaptation is the first major work to examine the role played by Senate Majority Leader Mike Mansfield, Democrat from Montana, in the formulation and execution of U.S. Vietnam policy. Drawing upon material from the Mansfield Papers, personal interviews, public speeches, and recently declassified documents, Olson traces Mansfield's journey from ardent supporter of Diem in the late 1950s to quiet critic of LBJ in the mid-1960s, and finally, to outspoken opponent of the Vietnam War in the late 1960s and early 1970s. Olson focuses his attention on Mansfield's speaking ability and his use of the written word, analyzing the ways in which they proved crucial in shaping the policies of the Eisenhower, Kennedy, Johnson, Nixon, and Ford presidential administrations. He also examines the way personal and political situations converged to force Mansfield into the center of the stormy Vietnam controversy, and eventually into a position of leadership in the campaign to end America's military presence in Southeast Asia. To date, little has been done to evaluate the roles played by key congressional figures in the Vietnam War debate, thus, Mansfield and Vietnam is bound to become a significant contribution, not only to rhetorical studies, but also to twentieth-century diplomatic history and to the study of congressional-presidential relations.