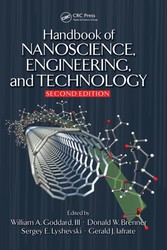 The ability to study and manipulate matter at the nanoscale is the defining feature of 21st-century science. The first edition of the standard-setting Handbook of Nanoscience, Engineering, and Technology saw the field through its infancy. Reassembling the preeminent team of leading scientists and researchers from all areas of nanoscience and nanotechnology along with several new pioneers, this second edition will guide the field through its burgeoning adolescence.The phenomenal growth and staggering variety of applications of nanotechnology prevent any reference from providing a complete picture of the field. Instead, this edition surveys the most important areas, the most promising technologies, and the fastest-growing developments of current interest. In particular, it discusses fundamental theory of molecular and nanoelectronics, advanced fabrication technologies, modeling and simulation results, and novel molecular and nanoelectronic devices.New chapters in the Second Edition explore...The story of how the National Nanotechnology Initiative was born, where it is now, and where it is goingMolecular computing and processing platformsSpin field effect transistorsMoletronics and spintronicsNanoarchitectonicsMolecular machinesMagnetic manipulation applications in biomedical scienceBiological- and chemical-mediated self-assemblyNanomanufacturingNanotextile technologiesNanofluidics for cell biologyCarbon nanostructures and nanocompositesAccelerated design tools for nanophotonic devicesNanoparticles for drug deliveryRemaining the definitive reference for nano researchers around the world, the Handbook of Nanoscience, Engineering, and Technology, Second Edition provides the signposts for blazers of the nano trail.