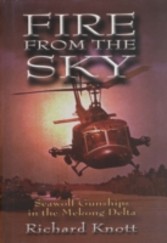 Fire from the Sky - Seawolf Gunships in the Mekong Delta

Fire from the Sky - Seawolf Gunships in the Mekong Delta

This is the dramatic history of the HAL-3 Seawolves, the U.S. Navy's first and only helicopter gunship squadron of the Vietnam War. The squadron was established ",in country", to support the fast, pugnacious river patrol boats of the brown water navy. Flying combat-worn Hueys borrowed from the Army, the mission of the Seawolves quickly expanded to include rapid response air support to any friendly force in the Delta needing immediate, no-holds-barred assistance. Operating in two-plane detachments from specifically configured LSTs, hastily constructed bases, and primitive campsites, the navy gunships and their crews responded to calls within minutes. Flying in all kinds of weather, day and night, they arrived at tree-top level with forward-firing rockets and flex-guns blazing. Door gunners hung outside the violently maneuvering helicopters delivering a hail of fire with their hand-held M-60 machine guns. The Seawolves inserted SEALs deep into enemy territory, and extracted them, often despite savage enemy opposition. They rescued friendly combatants from almost certain capture or death, and evacuated the wounded when Medevac helicopters were not available.Gleaned from historical documents and the colorful recollections of more than sixty Seawolf warriors, this is the first complete history of the most decorated Navy squadron of the Vietnam War. Naval aviator Richard Knott recounts the story of the Seawolves from the dawning of the concept to the moment the last squadron commander turned out the lights.