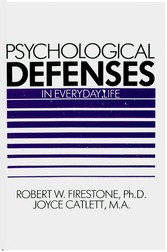 Trying TO WARD OFF and soothe painful experiences in our early childhood, we unintentionally become prisoners, locked into a defensive style of living. In spite of our wishes, we often recreate the kind of life we had hoped to escape or outgrow. By continuing to ease our pain with the methods we learned as children, we give up the luxury of completely experiencing life in the present. In this sense, we are not free individuals. Instead, we live defensively.

There are six dimensions of defensive or neurotic living. These dimensions are not isolated; they overlap and merge with each other. Each individualâs unique life-style may make use of any or all of these aspects of defensive living.

The major aspects or dimensions of neurotic living are:

A major dimension of defensive living is the destructive, repetitious process of reliving rather than living; it is the attempt to recreate a parent in other persons or institutions. Most people experienced some degree of pain while growing up because their needs for love and nurturing were not fully met. For those who suffered a great deal of emotional deprivation and rejection in their childhood, the need to repeat the patterns of their early lives may have become compulsive.

When a child experiences much emotional deprivation, he feels the anxiety and pain within his entire being. Small and vulnerable, he is helpless in the face of the truth that his parents feel or express little love for him, and so he represses this awareness and looks for ways to ease his fears and suffering. Knowing that he is totally dependent on his parents for his physical survival, he is forced to block out his feelings of being unloved by them. Put into words, his primitive thought process would be, âIf they donât love me, they might abandon me and Iâll die. Thatâs an intolerable idea; I must and will believe they love me.â

As he grows older, the child attempts to exclude any experience that conflicts with his deep belief about the certainty of his parentsâ love. He can accomplish this by making sure his life mirrors his original childhood experience; that is, he must exclude the possibility of different, more positive experiences.

In an animal experiment, young pigs were fed a minimum subsistence diet, food that barely kept them alive for an extended period of time. Later in the experiment, more nutritious food was made available to them, but they preferred to eat the substandard food they were used to.

A child, too, becomes habituated to a negative environment and negative behavior patterns and loses any conscious desire to escape or change. Recreating a similar environment and repeating the same patterns in his adult life serve to reduce and perhaps even completely block the awareness of his initial pain, fear, and anxiety about abandonment.

There is another phenomenon reported from animal studies that is analogous to the human propensity to repeat hurtful childhood patterns. In an experiment, dogs were strapped into a harness that made them unable to move and were then given electric shocks. Later the dogs were placed in a box where they could learn to escape the shock by simply jumping across a low barrier from the shock section to the nonshock section. The dogs that had been restrained so that they couldnât escape stayed in the shock section until they were dragged away, even though they were now free to jump across the barrier. Other dogs, who had not been harnessed (helpless) when first shocked, quickly learned to jump to freedom.

It is true also that a child who is helpless to change his situation will often cut off his awareness of pain and remain passive, accepting the same hurtful situation as it âhappensâ to him again and again throughout his lifetime. When one studies the patterns in human interactions, it is amazing to see how often adults choose a partner or mate whose behavior resembles that of one of their parents. A daughter who was pampered and praised for her childish performances will probably marry a man who treats her like a princess. Many times a son will marry a woman with the same characteristics as his mother. Frank was a man who found such a woman, someone with whom he could repeat the unhappiness of his childhood.

Frank grew up hating his mother. Of the three children in his family, he had been singled out by his mother to âkeepâ for herself. Frank was a sickly child, suffering from a chronic sinus condition, and over a period of years, he had to make many visits with his mother to an out-of-town doctor.

Frank remembers those visits well. âI sat for hours in waiting rooms. Mother was always checking to see if I was feeling all right or if my clothes were getting wrinkled. I was humiliated, but mostly I was ashamed in front of my father when we returned from these trips. My mother would report the latest news about my health, and my father would look at me with silent disgust. He thought I was a mamaâs boy, and there was nothing I could do to change his opinion of me because I was so weak and sickly looking.â

Before he had developed his sinus condition, Frank had been a rough-and-tumble kind of kid, always exploring his environment. He especially remembered a very early routine, which he related to me:

I can see myself as a small kid, about two or three years old. I am walking and running around the house having lots of fun just looking at things, exploring dark corners in the cellar, discovering old pieces of machinery lying around the garage, even taking an old alarm clock apart. Suddenly my mother is standing over me, frowning. She grabs me up and throws me into a crib (which I slept in until I was five) and tells me that I have to learn to stay out of things. She was putting me to bed for my ânap.â I stayed in that crib for hours every day. I remember studying the design on the mattress cover. It was the only thing I had to look at. Once in a while, my mother would let me out of the crib, but only to bring me out into the living room to show off before her friends, asking me to repeat âcuteâ sayings or insisting that I recite a line of poetry which she had taught me. It was at these times I loathed her the most.

When Frank was in college, he was attracted to, and finally married, a girl who had a strong need to control his activities because of her own insecurity. She sulked when Frank went to baseball games with his friends and when he occasionally stopped by his old college roommateâs house for a quick drink after work. Soon Frank found himself cutting out all of these extra activities. Instead, he spent more and more time at home, working on house repairs and gardening.

In discussing his marriage with me, Frank began to wonder about his wifeâs concern about his health, which had improved greatly since his childhood and now gave him no concern.

You know, Marcia takes an incredible interest in vitamins and eating nutritious foods. She insists that I eat correctly, whatever that means, and that I eat the kind of health food meals that she likes. I swear, sheâs almost as fanatical as my mother was.

This conversation took place between Frank and me three years after he had married Marcia. When he mentioned in passing that his wife resembled his mother in this one characteristic, he failed to connect it with anything else in the overall pattern of repetition in his life. Frank was irritated by Marciaâs interference in his eating, but he put up with it good-naturedly for many more years.

According to Frank, Marcia had one outstanding talent: an ability to entertain his business associates in their home.

Marcia is a wonder at throwing these parties. Sheâs the perfect, gracious hostess. Sheâs great as a conversationalist, too. We always end up talking about something interesting, usually something about my work at the lab. [Frank was a nuclear physicist.] I think that she has a knack for guiding the conversation where she wants it to go. I think, too, that she likes to hear me talk because thatâs the way the evenings end up, with me and a couple of other men discussing the latest findings in the field. I love those evenings.

By the time Frank and Marcia had been married ten years, the sparkle was wearing thin on the dinner party conversation, and Marcia was tightening her grip on Frankâs freedom. She made all the decisions about who they would have over, where they would go on vacations, and which private school their children should attend. Frankâs resentment grew, and he even began to view in a different light those evenings he had once loved.

I realize now that Marcia is a manipulator. I know she guided these after-dinner talks in my direction, but it was very similar to my motherâs drawing attention to my cute childish sayings. I finally came to know that everyone else was bored with those evenings except me.

Today Frank feels stifled by Marciaâs domineering style of relating to him and to his friends, yet he feels powerless, just as he did when he was a child, to remove himself from a situation that has been degenerating for years. He is afraid to risk a fresh start with someone else, and he has not been able to stop Marciaâs slow erosion of his life. He has felt too comfortable for too long either to effectively call a halt to her controlling techniques or to seek a new life without her. He is locked into a prison of his own making....