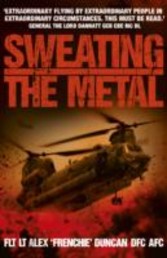 Sweating the Metal - Flying under Fire. A Chinook Pilot's Blistering Account of Life, Death and Dust in Afghanistan

Sweating the Metal - Flying under Fire. A Chinook Pilot's Blistering Account of Life, Death and Dust in Afghanistan

With bullets flying, wounded soldiers scream out in pain as the Chinook comes in to land in one of the most dangerous parts of Afghanistan. At the machine's controls is one man and if he doesn't stay calm then everyone could die. That man is Flt Lt Alex 'Frenchie' Duncan and he's been involved in some of the most daring and dangerous missions undertaken by the Chinook force in Afghanistan. In this book he recounts his experiences of life under fire in the dust, heat and bullets of an active war zone.At 99ft long, the Chinook is a big and valuable target to the Taliban, who will stop at nothing to bring one down. And yet Frenchie and his crew risk everything because they know that the troops on the front line are relying on them.Sweating the Metal is the true story of the raw determination and courage of men on the front line - and it's time for their story to be told.