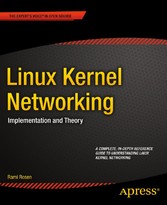 Linux Kernel Networking takes you on a guided in-depth tour of the current Linux networking implementation and the theory behind it. Linux kernel networking is a complex topic, so the book won't burden you with topics not directly related to networking. This book will also not overload you with cumbersome line-by-line code walkthroughs not directly related to what you're searching for; you'll find just what you need, with in-depth explanations in each chapter and a quick reference at the end of each chapter.Linux Kernel Networking is the only up-to-date reference guide to understanding how networking is implemented, and it will be indispensable in years to come since so many devices now use Linux or operating systems based on Linux, like Android, and since Linux is so prevalent in the data center arena, including Linux-based virtualization technologies like Xen and KVM.